Southcott Pines Park Association was formed in 1955 under the auspices of the Southcott Pines Park Land Company to protect the privacy and interests of property owners in the Southcott Pines subdivision.  In 1980, with the co-operation of the Township of Bosanquet, the Land Company set aside 8 acres for a park and Clubhouse.  A Clubhouse was built in 1981 and in 1984 the Clubhouse and common areas were turned over to the Association which then became incorporated as a non-profit community association.  A Board of Directors assumed the responsibility of maintaining the assets of the Corporation and providing services to its members.

Today, a twelve member elected volunteer Board of Directors oversees the functioning of the Association that includes maintaining common areas, providing leaf and bush pick-up, a cable TV service and preserving as much of the natural heritage as possible through ‘Schedule A’ covenants.  The Association employs an Office Manager and a Property Manager and relies on volunteer members to carry out various tasks throughout the year.

[taken from a Spring 2001 Newsletter article by Bob Southcott]

1826 – The Canada Company purchased 1 million acres of land from the Crown known as the ‘Huron Tract’.

1860 – Upstream farmers blaming the mill dam for spring flooding burned down the mill.  Some original timbers in the channel still visible from the Clubhouse.

1955 – In the fall of 1955 the first Association was formed to protect the interest of property owners in the Pines and to assure the privacy of the subdivision. B.W. Tuckey served as the first President of Southcott Pines Park Association

1969 – With the passing of Mildred Allison, the last of the original directors, the company was taken over by Don, Bob, Jack & Jim Southcott who developed the remaining two-thirds of the property.

The Ausable River is central to everything about this area. Starting at Staffa, a distance of some 40 miles, it takes a tortuous route of some 150 miles. It crosses Highway 4 at Exeter, loops north and then south through Middlesex and Lambton counties, forming the deep gorge at Arkona, and finally from Port Franks to Grand Bend, originally making the “grand bend” and flowing through the old riverbed at the easterly edge of the Pines back again to Port Franks.

In 1875, the Canada Co. dug a cut to Port Franks to relieve the flooding in the Klondyke and surrounding area. Since that time, no water from the Ausable flows into Grand Bend. It is replaced by waters from the Parkhill Creek. In 1892, a cut was dug from the “grand bend” to the lake. That left the old riverbed almost dead. Its waters originate from springs in the bed itself. It’s at this previous sharp turn that Grand Bend got its name.

In an historical report several years ago, the writer stated that at one time before roads, roughly 1829, the riverbed was likened to the 401, as the best form of travel in the land it traversed. First the Indigenous People (Iroquois, Algonquins and Neutrals) used it extensively and for many reasons. It was access to the flint beds of Stoney Point, it led to and from the inland lakes of George, Smith and Burwell, hunting grounds during the migration of ducks, geese and carrier pigeons. It was an alternative route to Lake Huron on stormy days.

The Governor of the Canada Co. was Charles Bosanquet from which the Township got its name. In 1832 Ernest and William Brewster bough lots 1-7, which takes in Southcott Pines. They were required to build a mill on the banks of the Ausable. If was a very successful operation until the early 1860’s. Lumber was floated downstream to Port Franks and then by boat to Goderich, Port Huron and Detroit. The Brewster hands were the only people living in the area until the 1840’s when French people migrated from Quebec.

Unfortunately, the dam backed up and flooded the neighbouring farmlands. Rioting settlers by night destroyed Brewster’s Mill in 1860. Some of the pilings can be still seen from the Southcott Pines Clubhouse windows, and a charred timber can be found on display there as well. Click on the picture below. 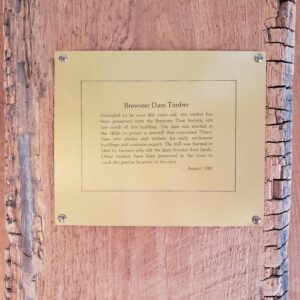 Brewster sold all but lot 6 to John Dalziel, who in turn sold to Charles Southcott, a pioneer merchant tailor in Exeter, but at the time living in Toronto, the property now known as Southcott Pines, Harbour Park and Yacht Club Woods, for the sum of $950. The area covered slightly over 200 acres.

In 1946 the descendants of Charles’ brother, John, bout the property from Charles’ heirs with he exception of four homes they had built in Block G, south of the west entrances on the west side of Shoreline Drive.

Most of the subdivision in 1946, with the exception of the logging trails, was in the natural state. There were the family homes as described above as the only inhabitants. In the late 1940’s, the Southcott family proceeded very slowly with the development of the property. All were business people in Exeter and this was a sideline, sort of a fun venture.

Although interested in the development, we of the younger generation, not only had our own responsibilities but also were reluctant to “interfere” out of respect for our seniors.

In 1969, both Orv and Melv, the last of the original charter directors passed away. At that point, Don, Jack, Jim and I became shareholders along with Mrs. Allison. Her interests were purchased some time later.

One of our first endeavours of the new shareholders was to work with consultants to develop an overall concept as a guide to completing the remaining two-thirds of the property. The concept of cul-de-sacs, crescents, and contours was looked upon by the Ontario Government agencies as a model of design. Most, at that time, were laid out in grid fashion. This led to the registration of plans 588, 625 and 654.

Following the vision of their forbearers, the present shareholders made a serious effort to preserve the exceptional native vegetation. It was important for the family to recognize that this was not just the preservation of trees, but also of the shrubs and groundcover that this unique woodland had produced. The covenants (Schedule “A”) were adopted to help preserve this heritage by retaining borders of natural vegetation around each homesite. The roads reflect the sand-dune contours; the tree-lined streetscape and road islands retain the Pinery flavour. Many of our residents value history and heritage and appreciate nature’s refreshments. Others misinterpret the requirement or contractors take unnecessary liberties.

One of the controversial projects was dredging the old riverbed from Lake Road to the south edge of the property in the early 70’s. As always, accepting change by residents, especially along the east bank, was difficult. Previously you could walk across the bed almost anywhere, particularly in the dry season. Taken out was the top layer of vegetation and a gravel seam of about 3ft.

Included in plan 588, was an eight acres site now known as Brewster Park, on which the Clubhouse stands. The park was set aside for recreational purposes through the cooperation of the Township of Bosanquet. The clubhouse was completed in 1981 and turned over to the Association at a later date.

The final lots were sold in 1989 after which the common areas were turned over to the Association.

The Melv Southcott family had published the Exeter Times-Advocate for over 50 years. Don was editor until he became Executive-Assistant to Ontario Treasurer Charles McNaughton. When Mr. McNaugton retired, Don was appointed the General Manager of the Pines. Prior to that, Bob carried on those duties along with those at the Times-Advocate. He sold the paper in 1975 and joined the company full time in record keeping and accounting.

The Southcott have left their mark in Grand Bend, and the preservation of its natural heritage. Their forward thinking then, is something we need today more than ever today. With only 1% of the Oak Savannah remaining on the planet, making Southcott Pines and surrounding areas one of the most vulnerable ecosystems on the planet, we need to carry forward the what they worked hard to protect for future generations, and our forest friends to enjoy.

(some of the facts noted here are credited to Dr. Sherwood Fox’s “T”aint Runnin’ No More” and Andy Dixon’s “What Most People Don’t See at Grand Bend”. Fox was President of Western University and Dixon was a teacher at Exeter District High School)